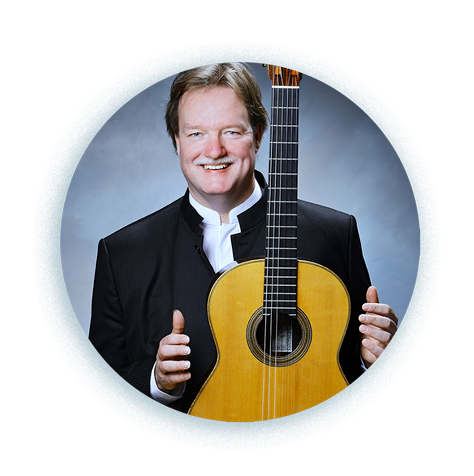 Timo Korhonen, (b. November 6, 1964 in Rautalampi, Finland) is one of the most versatile proponents on his instrument in the world. Freedom of interpretation, bearlike strength and richness of sound are components of his deep-rooted artist persona. Korhonens interpretations are natural, strong in contrast and uncompromising in their aim at reprodusing the content of a composition in as true manner as possible and with the profound understanding of its style.

Timo Korhonen made his début at the age of 14 and began his international career at the age of 17 when he became the youngest ever winner of the guitar category in the ARD competition in Munich. He has studied with Oscar Ghiglia, Seppo Siirala and Pekka Vesanen. Korhonen’s repertoire includes the entire core repertoire written for his instrument. He has premiered more than 70 new works, and composers such as Magnus Lindberg, Leo Brouwer and Toshio Hosokawa have written works for him. From 1998 to 2008 Timo Korhonen was the artistic director of the international GUITARISTIVAL competition and festival, and from 1998 to 2000 he was the artistic director of the Suomenlinna Culinary Concerts in Helsinki. Currently he works as a Docent at the Turku Music Academy. From January 2005 to the end of June 2007 he worked as guest professor at the Luigi Cherubini Conservatory in Florence. He was teacher at the Sibelius Academy in 1989-1999. His several students have won dozens of prizes in international competitions.

Korhonen records regularly for the Ondine label. His recordings have been acclaimed by critics and have received several awards. For example, the disk containing Concerto of Helsinki, written for Timo Korhonen by Leo Brouwer, with the Tampere Philharmonic conducted by Tuomas Ollila (Hannikainen), won the Cannes Classical Award 2003 (ODE 979-2). Timo Korhonen plays guitars built by “Weissgerber” (Richard Jakob) in 1925, 1928 and 1930 and a guitar built by Brian Cohen in 1996